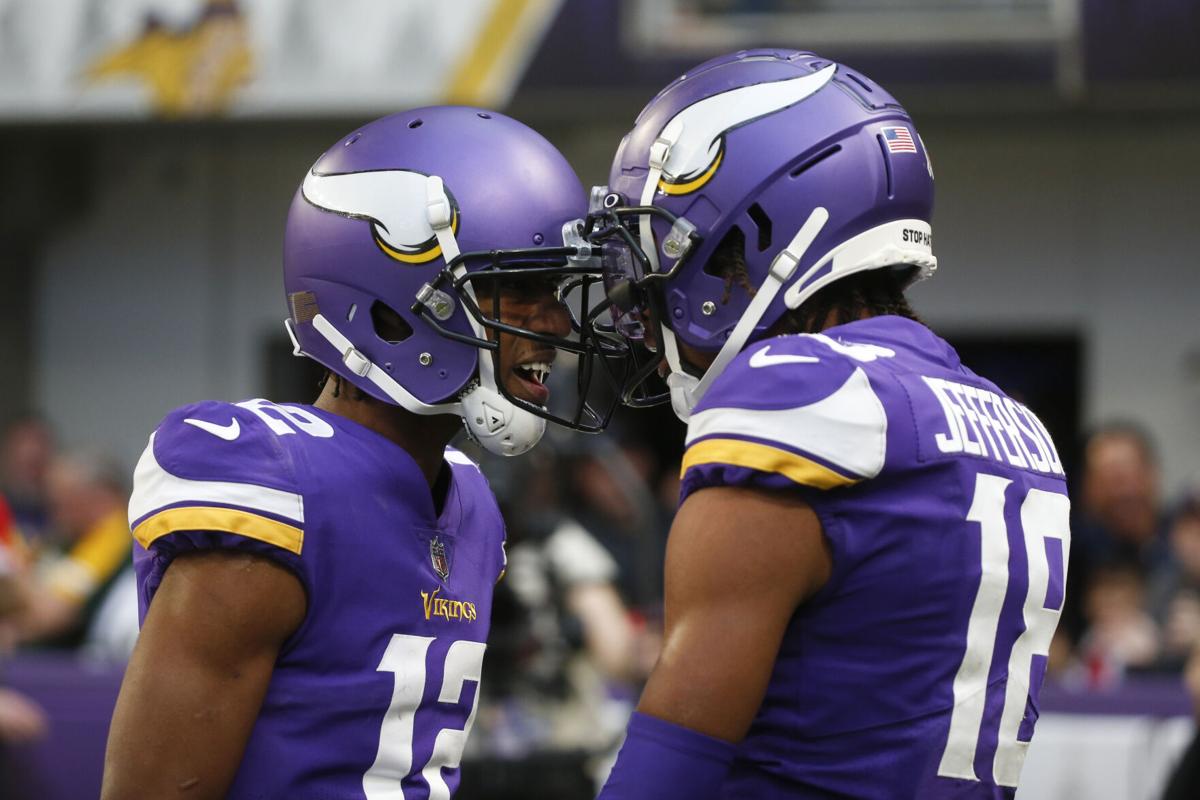 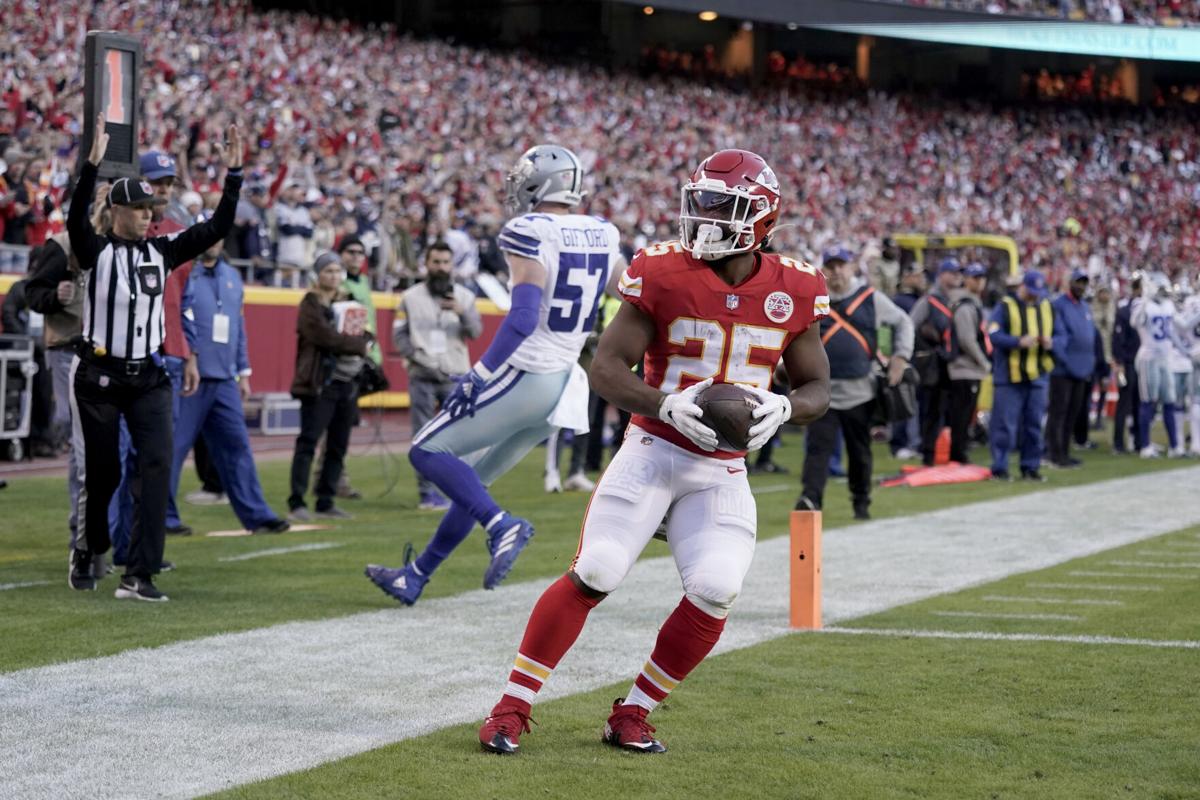 Kansas City Chiefs running back Clyde Edwards-Helaire celebrates after scoring a touchdown against the Dallas Cowboys on Sunday.

Kansas City Chiefs running back Clyde Edwards-Helaire celebrates after scoring a touchdown against the Dallas Cowboys on Sunday.

MINNEAPOLIS — Greg Joseph made a 29-yard field goal as time expired to give the Minnesota Vikings a 34-31 victory over the Green Bay Packers on Sunday, finishing a classic back-and-forth with Aaron Rodgers by making sure the three-time NFL MVP didn’t get to touch the ball last.

Kirk Cousins passed for 341 yards and three touchdowns for the Vikings (5-5), who watched yet another game come down to the final play after Rodgers threw three of his four touchdown passes in the second half.

Unable to practice much at all this week because of a toe injury, after missing much of the first half of the month with COVID-19, Rodgers finished 23 for 33 for a season-high 385 yards for Green Bay (8-3).

Desmond King had two of the Texans’ four interceptions — three in the fourth quarter to snuff out the Titans’ attempted rally. Houston turned those and a fumbled punt into 13 points. The Texans also had two sacks.

KANSAS CITY, Mo. — Clyde Edwards-Helaire ran for 63 yards and a touchdown in his return from injured reserve, Chris Jones and the Kansas City defense made life miserable for Dak Prescott, and the Chiefs beat Dallas.

Patrick Mahomes was 23 of 37 for 260 yards with an interception and a fumble for Kansas City, but he was bailed out by a defense that played its best game of the year. Prescott was held to 216 yards passing and two interceptions for the Cowboys (7-3).

ORCHARD PARK, N.Y. — Jonathan Taylor set a franchise record by scoring five times and took over the NFL lead in both yards rushing and touchdowns as Indianapolis routed Buffalo. Taylor scored three times in the first half, including a 23-yard catch, en route to the first five-touchdown game in the league this season.

The Colts (6-5) continued their roll by improving to 5-1 in their past six games. The Bills (6-4) fell a half-game behind New England in the AFC East.

Jackson was sidelined by illness for the AFC North-leading Ravens (7-3), who ruled him out 90 minutes before kickoff. The 2019 MVP was a full participant in practice Friday after being held out the previous two days. Coach John Harbaugh said Wednesday the illness was not COVID-19.

McCoy went 35 of 44 and outplayed Seattle’s Russell Wilson, who made his first home start since undergoing finger surgery. McCoy threw touchdown passes of 1 and 2 yards to Zach Ertz in the first half, got a bit of luck in the third quarter when a potential interception was overturned on replay, and had his first 300-yard passing game since 2014.

Newton threw for 189 yards and two touchdowns and ran for a 24-yard score. Christian McCaffrey combined for 119 yards from scrimmage and a touchdown for the Panthers (5-6).

The Eagles (5-6) have won two in a row for the first time this season and rookie coach Nick Sirianni earned his first victory at home in five tries.

The Saints (5-5) dropped their third straight since losing quarterback Jameis Winston to a season-ending ACL injury. Trevor Siemian threw three touchdown passes and two picks and ran for a score without several missing starters around him.

CLEVELAND — Nick Chubb caught a touchdown pass and ran for 130 yards as Cleveland Browns held on to avoid a season-wrecking upset and keep Detroit winless.

The Lions (0-9-1) made some critical mistakes while growing their winless streak to 14 games. Detroit played without injured starting quarterback Jared Goff. Tim Boyle finished 15 of 23 for 77 yards with two interceptions in his first NFL start.

Joe Burrow was 20 of 29 for 148 yards and a touchdown pass to Ja’Marr Chase for Cincinnati. Chase leads all rookies with eight touchdowns this season.

Bengals kicker Evan McPherson became the 13th player with three field goals of 50 yards or more in a game. McPherson was perfect on four field-goal Derek Carr finished 19 of 27 for 215 yards, one touchdown and one interception. Tight end Darren Waller caught seven passes for 116 yards.

Garoppolo completed 16 of 22 passes for 176 yards. He connected with Brandon Aiyuk and George Kittle for scores. It was Kittle’s third TD in as many weeks. Deebo Samuel ran eight times for 79 yards and a touchdown.

Tagovailoa finished 27 of 33 for 273 yards and touchdown passes to Gaskin and Mack Hollins with one interception. Receiver Jaylen Waddle had a 1-yard TD run for Miami.

For the Jets, Joe Flacco made his first start in place of the injured Zach Wilson and went 24 of 39 for 291 yards and two touchdowns.