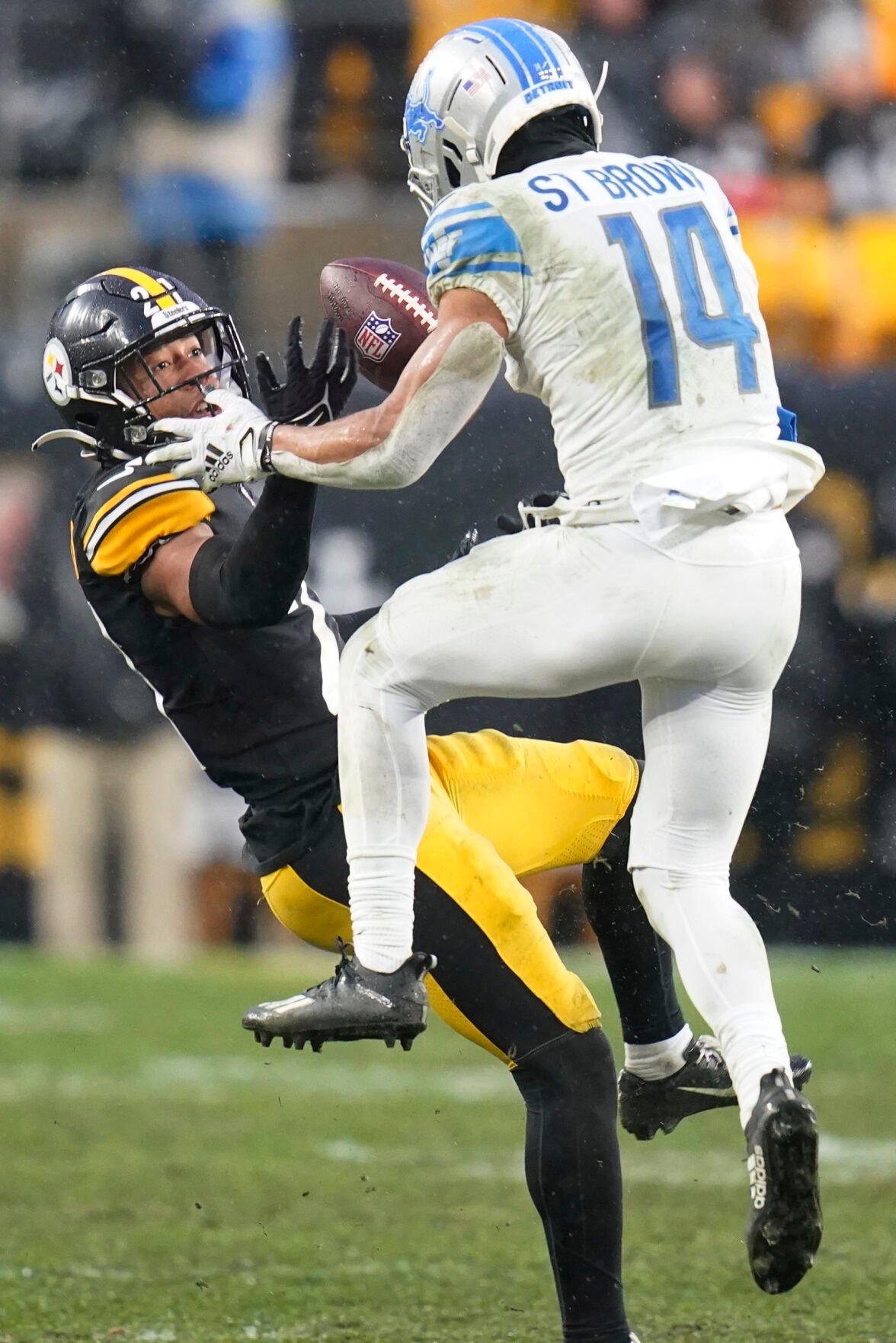 Tampa Bay Buccaneers quarterback Tom Brady yells at his team during the second half of an NFL football game against the Washington Football Team, Sunday, Nov. 14, 2021, in Landover, Md.

Tampa Bay Buccaneers quarterback Tom Brady yells at his team during the second half of an NFL football game against the Washington Football Team, Sunday, Nov. 14, 2021, in Landover, Md.

PITTSBURGH — Playing without star quarterback Ben Roethlisberger, who entered the COVID-19 protocol on Saturday night, the Steelers slogged their way to a 16-16 tie with the Detroit Lions on Sunday in an ugly nearly four-hour marathon that produced more comedy than highlights.

Mason Rudolph completed 30 of 50 passes for 242 yards with a touchdown and an interception. Najee Harris ran for 105 yards and at times appeared to be Pittsburgh’s only legitimate offensive weapon.

De’Andre Swift ran for a career-high 130 yards for the Lions (0-8-1), who relied heavily on the run to avoid a ninth straight loss. Jared Goff connected on 14 of 25 passes for just 114 yards.

TITANS 23, SAINTS 21NASHVILLE — Ryan Tannehill ran and threw for touchdowns as the Tennessee held off the Saints for their NFL-best sixth straight victory.

The Titans (8-2) also became the second team in NFL history to win five straight over playoff teams from the season before. The Saints (5-4) dropped their second straight since losing quarterback Jameis Winston to a season-ending ACL injury.

Brady threw two picks just like in the loss to New Orleans two weeks ago and finished 23 of 34 for 220 yards and two touchdown passes. He did throw TD passes to Cameron Brate and Mike Evans. The 40-yard connection with Evans cut the Buccaneers’ deficit to 23-19.

COWBOYS 43, FALCONS 3ARLINGTON, Texas — Ezekiel Elliott ran for two touchdowns, Nahshon Wright recovered a blocked punt for a score a week after touching one kept Dallas from getting the ball, and the Cowboys routed the Falcons.

Dallas (7-2) looked much more like the NFL’s No. 1 offense with Dak Prescott throwing two TD passes to CeeDee Lamb and Elliott finishing two drives kept alive by fourth-down conversions, all before halftime.

PACKERS 17, SEAHAWKS 0GREEN BAY, Wis. — Aaron Rodgers was uneven in his return from COVID-19 but did more than enough to support a standout Green Bay defense.

A.J. Dillon rushed for two fourth-quarter touchdowns for the Packers, who handed the Seahawks their first shutout loss in a decade. Rodgers went 23 of 37 for 292 yards and threw an interception in the end zone in the third quarter.

Seattle’s Russell Wilson also struggled in his return after missing three games with an injury to the middle finger on his throwing hand. He went 20 of 40 for 161 yards with two interceptions. .

PANTHERS 34, CARDINALS 10GLENDALE, Ariz. — Cam Newton provided a flashback to his Superman days in his second debut with the Panthers, throwing for one touchdown, running for another.

Newton, the 2015 NFL MVP who was signed by the quarterback-thin Panthers earlier in the week, made his presence felt on his first play of the game, entering on third down and screaming “I’m back!” after barreling into the right corner of the end zone for a 2-yard touchdown. On Carolina’s next drive, Newton threw a 2-yard TD pass to Robby Anderson as the Panthers (5-5) built a stunning 17-0

The Eagles (4-6) won for the fourth time on the road and prevented the Broncos (5-5) from sweeping the NFC East teams on their schedule just one week after Denver dominated Dallas in one of the biggest upsets of the season.

VIKINGS 27, CHARGERS 20INGLEWOOD, Calif. — Kirk Cousins threw a pair of touchdown passes to Tyler Conklin and Dalvin Cook rushed for 94 yards and a score. Justin Jefferson had nine receptions for 143 yards to help Minnesota (4-5) snap a two-game losing streak after it squandered late leads to Dallas and Baltimore.

Los Angeles (5-4) has dropped three of its past four.

COLTS 23, JAGUARS 17INDIANAPOLIS — Jonathan Taylor rushed for 116 yards and a touchdown and Indianapolis returned a blocked punt for a score.

Indy (5-5) has won four of five to reach .500 for the first time this season. The Jaguars (2-7) have lost 12 consecutive road games and nine straight against AFC South foes.

Indy’s Carson Wentz was 22 of 34 with 180 yards but was held without a TD pass. Jacksonville’s Trevor Lawrence finished 16 of 35 with 162 yards. He has 13 turnovers this season.

Allen was 21 of 28 for 366 yards with TD passes to Matt Breida and Stefon Diggs and an interception. Breida added a scoring run, as did Devin Singletary, Zack Moss and wide receiver Isaiah McKenzie as Buffalo’s offense looked alive and well.