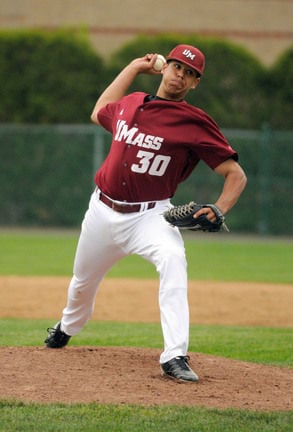 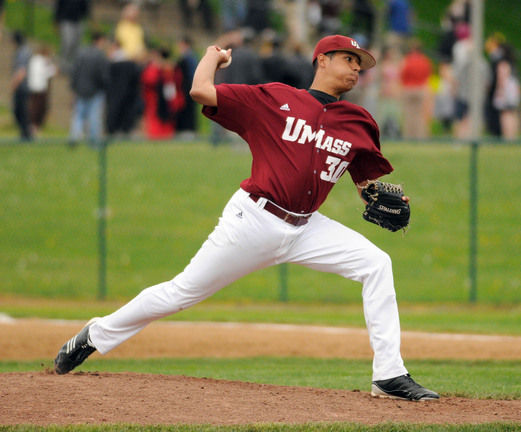 No amazing Hollywood-inspired Henry Rowengartner—type injection (see "Rookie of the Year") of lightning into his pitching arm.

No. Dennis Torres is a product of his own survival skills. And his love for baseball.

With the Major League Baseball draft less than a month away, the resilient Torres, a junior at UMass Amherst, is looking at a potential pro career.

If you went searching for Torres' high school baseball history at Central Catholic, you'd be wasting your time.

Torres was branded with "can't play at this level" on all four occasions.

"Knowing I was good enough to play with those kids kept me coming back year after year," said Torres, who admits the snubbings never got easier. "I just kept thinking this was the year. ... This was going to be my year."

At Central, it never happened.

Wise beyond his years

If maturity, common sense or sensibility were the determining factors, Torres would be a first-round draft pick on June 4 when the draft begins.

Think of the frustration, compounding with each spring cut. Friends tugged at him from every side.

"Come play at Lawrence High," was one comment he heard from his summer baseball teammates on Lawrence Legion and Lawrence Sr. Babe Ruth.

"You know you can play with us at the Voke," was another piece of advice.

"I heard it all the time," said Torres.

"But I had three older sisters, two at Lawrence High and the other at Whittier. All three dropped out. I wasn't going someplace that it could happen to me, too. Central protected me from that, I think. I couldn't risk it. So I had to stay.

"Even now, I feel like staying at Central was the right thing for me. I'm the first to graduate high school."

So Torres played baseball only on summer teams, remaining committed like the college prospect he always believed he was.

He was a regular at "DB's Baseball & Softball" indoor baseball facility in North Andover, enlisting the tutelage of area baseball legend Dave Bettencourt any time he could.

There's a reason Bettencourt let him practice for free. Torres was driven.

"To have been told so many times that you're just not good enough to play, I probably would have given up myself a long time ago," said Bettencourt. "But he loves the game so much. You just have to admire him."

Torres was accepted at Northeastern and Suffolk among others.

He couldn't pass up UMass Amherst because of the "academic aid" package.

During his first year at UMass, he worked in the campus dining halls and picked up a job at a downtown Amherst food chain.

At home, he found work in the Lawrence General Hospital kitchen and also helped out any time he could at DB's.

But something was missing two hours away from home — baseball.

Was Torres crazy enough to try out for UMass, a Division 1 program with an alumni list that includes ex-big leaguers like Mike Flanagan, Jeff Reardon and Gary DiSarcina, plus our own Dean Borrelli — a Central product who made it all the way to Triple A?

"I had played my last game for Legion, and my Pops tried to convince me that I had nothing to lose in trying out," said Torres, who contacted coach Mike Stone a couple weeks before his sophomore year at UMass. "By then, I was so used to the disappointment of being cut, I just figured why not."

"Dennis was working at third base, and you could see the arm as he threw across the diamond," said Stone. "Immediately, I told him, he was not an infielder, he was a pitcher."

Torres, a neophyte on the hill, just tried to survive.

"By far, making that team was the greatest life-changing moment I've ever had," said Torres, who was placed on what amounted to a taxi squad — that is he'd dress for and potentially play in home games but would not travel.

"The first thing I did was call my Pops. It was amazing. He was so proud."

For Stone, the life in Torres' right arm made him worth a shot.

"Easiest job of recruiting I ever had," joked Stone.

Live arms at the Division 1 level are a dime a dozen, though. Pitchers, who can cultivate that gift and prosper in a conference like the Atlantic-10? Well, they aren't so easy to locate.

"I had to learn how to pitch," said Torres, who after not seeing the field for UMass, spent the summer of 2010 in the North Shore League, where he met former Northern Essex Community College great Chris Anderson, who was drafted by the Twins in the 18th round in 2006.

"Chris has taught me so much about pitching," said Torres, "and what it takes to succeed."

Torres, who carries a 3.4 grade-point average as an accounting major, was a willing student.

"You see the makeup of the kid in how far he has come as a pitcher," said Stone. "Nothing was given to him. He has had to earn every step. And you can see with his will and determination, how he's accomplished that."

After opening last year in the bullpen, he went to midweek starter and eventually started a couple weekends down the stretch.

Anderson called Torres again last summer, only this time it was for the Seacoast Mavericks in the fledgling Futures Collegiate Baseball League.

Torres took his game and his pitching to the next level that summer in Rochester, N.H. He made a half-dozen starts and averaged an impressive one strikeout per inning.

At this point, Torres was throwing fastballs upwards of 90 mph and commanding both a change-up and curve ball for strikes.

The pro scouts, with their radar guns, started paying attention.

"He's got a fresh arm and he's a competitor," said Stone, who has seen Torres progress into his "Friday Starter" or No. 1 pitcher.

Torres, who picked up a no-decision Thursday at Dayton, is currently 3-3 with a 3.04 ERA with 43 strikeouts in 74 innings.

Two weeks ago, Torres took the mound in a crucial battle with Temple. Bettencourt, whose daughter Katie is a star on the UMass softball team, was at the game.

"The radar readings are legit with Dennis," said Bettencourt. "He's consistently between 87 (mph) and 89 (mph). He brings it up to the low 90s when he needs to, and tops out at 93. He's developed himself into a legitimate pro prospect. There were at least a dozen scouts with radar guns on him. I'm not the only one who feels that way."

Torres' outlook on his meteoric rise remains grounded in that same common sense that kept him focused on academics at Central despite all the disappointment on the athletic field.

"Look at this," said Torres. "We're flying out for a series in Dayton (today). This is amazing. We're treated like pro ball players here already. It's been a great year already, and we're not done."

He also knows what lies ahead. The draft often confounds like no other. Players expected to get drafted early sometimes slide deep. Others are bumped ahead, with no real explanation.

Torres has made it known to every scout he's seen. He's ready to sign a contract and become a pro.

"I'm ready," said the 21-year-old. "That's the progression. It's your junior year in college. You have a good season, and hopefully the next step is the pros."

If something goes awry, and he doesn't get chosen next month, Torres will return for a second summer with the Mavericks then finish off that accounting degree with one more big season for the Minutemen. But don't bank on it.

"In my mind, he's going to be picked. Scouts have told me they love him," said Bettencourt. "It's an amazing story. It may be late, but he's going to get that chance. It's a great lesson for everybody. If you believe in yourself, despite what other people say, don't give up."

TORRES NOT THE FIRST

Believe it or not, UMass baseball coach Mike Stone has had a similar story to Dennis Torres'.

Much like Torres, Doug Clark did not play baseball at Springfield Central.

"He played tennis in high school, and he was a football player who came here to play receiver on scholarship," said Stone.

Unhappy with football, Clark asked Stone for a tryout and soon found a regular spot in the outfield.

He wound up hitting .366 over three seasons and was drafted twice, by Milwaukee as a junior and San Francisco in round 7 of the 1998 draft after his senior year.

Clark, who totalled 11 at-bats for the Giants in 2005 and for Oakland in 2006, still plays in the Triple-A Mexican League.

As freshmen at Central Catholic, both Dennis Torres and Leif Sorenson were cut from the Raider frosh baseball team in 2005.

Torres, a junior athletically and senior academically, is now the No. 1 starter at Division 1 UMass Amherst, owning a 3-3 record with a 3.04 ERA for the Minutemen.

Sorenson, who transferred back to Haverhill High and eventually helped pitch the Hillies into the state tourney, is also a senior on the UMass baseball team, serving as the team's closer. The 6-foot, 190-pound righty is the Minutemen all-time saves leader with 20.