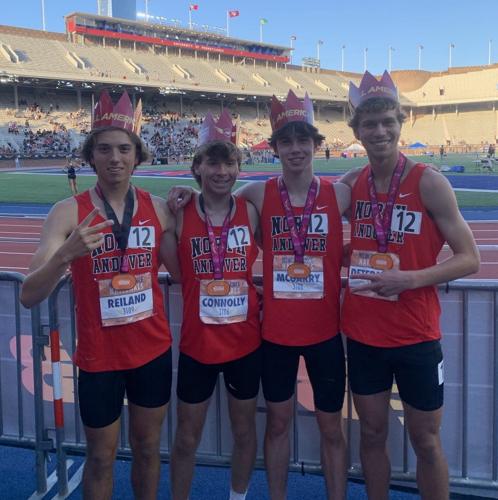 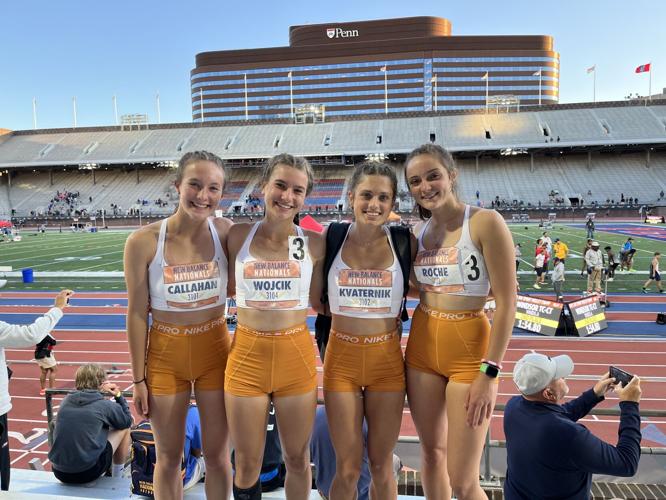 Instead, they did it twice.

This was in the “championship” division — or the top tier — meaning the Scarlet Knights were truly the No. 2 and 3 best, respectively, in those events against the best throughout the country.

“These two All-American races are such a big accomplishment for both us and our program,” said Reiland. “Obviously, I couldn’t have done anything without Ryan, Ronan, and Jack. The bond we have is incredible, and I feel like it’s one of a kind. I’m stoked with our two finishes. This really was a once-in-a-lifetime trip, and something that will stay with me forever.”

The Scarlet Knights’ time shattered the previous Eagle-Tribune area record of 7:51.72 by Methuen in 2006.

“Placing at Nationals has been a goal of ours for so long now, and it feels amazing to accomplish it,” said McGarry, who will run at UMass Amherst. “We have been working so hard towards this the entire season and we have been pushing each other to our best. It really exemplifies the grit of our team.”

According to renowned track historian Larry Newman of Haverhill, the mark is also the second fastest 4xMile in New England history, trailing just Wellesley, Mass., (17:31.08) in 2016.

“Placing third in the 4xmile was super awesome,” said Connolly. “We were expecting to do well, and it was a very competitive race, but we all did very well and we’re happy to be All-American.

“Then, we were coming into the 4x800 confident and feeling great. We are very happy we stuck with some great teams and got a new team PR. I am very happy with our team. We are super happy to be All-Americans, and we are pumped with our times and our whole season.”

“This is all thanks to my teammates and coaches really,” said Determan. “(Head) coach (Steve) Nugent and (assistant coach Bill) Varney have been so instrumental in putting us in a place to get All-American that it’s impossible to imagine our success without them. and then, obviously, Ryan, Cam and Ronan have been incredible this year, running absolutely out of their minds. It’s a really, really special group and I’m really glad I got to finish my high school career with them.”

Distance coach Varney was thrilled with the performance by his squad.

“First of all, we’re blessed to have kids so invested,” said Varney. “With guidance from (boys head coach Steve) Nugent and (girls head coach Rick) Dellichiaie, we have tried to develop a culture of hard work. There are no shortcuts to success. These kids have worked hard. Track, business, life, if you work hard, rewards will follow. Trust the process and the training and love what you do. and senior leadership has been key to much of this success.”

And while McGarry and Determan — who is headed to the University of California San Diego — have graduated, Connolly and Reiland will be back next spring.

“This is such a great way to end Jack and Ronan’s high school careers,” said Reiland. “They will be missed, but Ryan and I will be coming out with our minds on every record next year. We’re going to take summer training serious this year, and I’m really excited for the indoor season.”

The team of Erika Wojcik, Catherine Roche, Aisling Callahan and Leyla Kvaternik ran a 9:20.96 to place 10th in the championship 4x800 at Nationals.