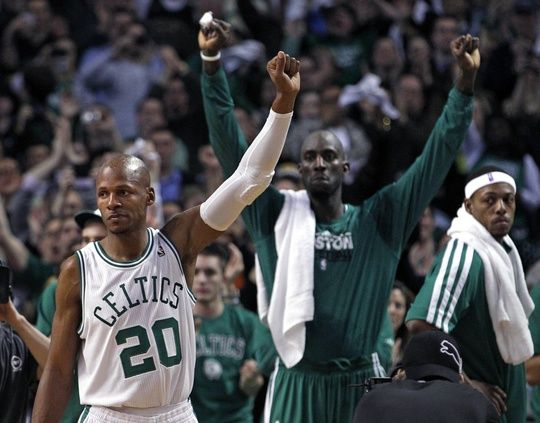 Boston Celtics veterans Ray Allen, Kevin Garnett and Paul Pierce may be older than most NBA players, but they still have well-above-average talent. 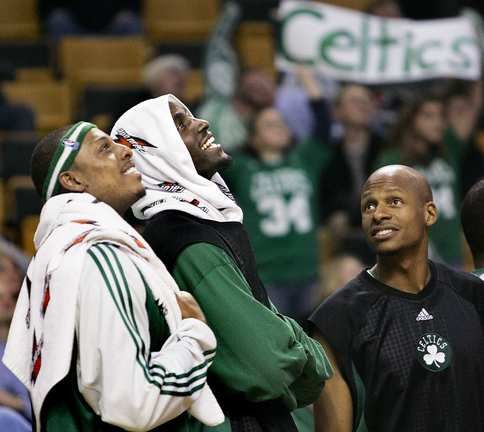 Pierce, Garnett and Allen drove the Heat into an intense seven-game Conference Finals.

Boston Celtics veterans Ray Allen, Kevin Garnett and Paul Pierce may be older than most NBA players, but they still have well-above-average talent.

Pierce, Garnett and Allen drove the Heat into an intense seven-game Conference Finals.

At a certain point, the Celtics will have to rebuild. This just isn't that time.

While the New Big 3 is ancient, Paul Pierce, Kevin Garnett and Ray Allen can still be the core of a formidable club.

The proof is in the pudding. Ask the Heat if they can still play.

It may not be ideal to rely on a 37-year-old Allen, a 36-year-old Garnett and a 35-year-old Pierce — those will be their ages to begin next season — but Kentucky's 19-year-old All-American Anthony Davis isn't walking through those doors.

Pierce (knee) wasn't himself in the playoffs and Allen (bone spurs in his right ankle) definitely will go under the knife. But even with them being sub-par, they pushed the Miami Heat to the brink in the Eastern Conference finals.

Miami and Chicago, assuming Derrick Rose makes a complete recovery from major knee surgery, certainly would be better than Boston. And perhaps scrappy Indiana and perennially underachieving Atlanta, too.

But the C's still could be in the mix. If they blow it up, there are no guarantees they'll be able to execute a quick turnaround. So why rush to possible mediocrity?

The right trade or free agent signing can bring in some scoring/youth. Couple that with some good fortune and good health and who knows what could happen next year?

The two questions are:

1. Who wants to come back? and 2. What will it take to bring them back?

Pierce is under contract for the next two years for a total of $32.1 million with the second year only partially guaranteed.

Garnett and Allen are both unrestricted free agents.

KG turned it on and late in the year and in the playoffs played like an All-Star.

Was it a salary push? A return to good health? Well-respected journalist Steve Aschburner, who knows KG well from his time in Minnesota, surmises he just might want to go out on top.

History, though, shows outside of the barbaric sport of football, very few athletes like to retire when they can still play.

With his length, sweet jump shot and maniacal intensity, KG can still play. He's not going to make the $21.2 million he had made this year, but he'd certainly be worth a Big Papi-type one-year deal. Maybe in the $12-million range.

Of course, he won't lack for suitors with the Lakers (his home is in Malibu) and the Brooklyn Nets among numerous teams often mentioned.

Boston has been a great fit and he loves playing for Doc Rivers, so those are two pluses the Celtics have.

Allen also will be looking at a big pay cut. He made $10 million this year, but may have to swallow his pride and accept the veteran's minimum.

When healthy, he still has that lethal jump shot that would fit perfectly for a championship-driven team. He'd be a tremendous option, for example, for Miami.

There have been rumblings that the proud Allen didn't like being demoted when Bradley came of age. Still, he's done great things in Boston. Also, his 5-year-old son, Walker, has juvenile diabetes and the family is thankful for the care he's received at the esteemed Joslin Diabetes Center in Boston.

Any way you look at it, this will be a crucial offseason for team president Danny Ainge and the organization.

He nearly dealt Allen and Pierce at the trade deadline this year, when the team wasn't playing well. He has two first round picks (21 and 22) and should have some money to spend.

In other words, he has plenty of options. I hope he goes with the easiest and best one, build around Rondo and the Big 3 and make another run in 2012-2013.