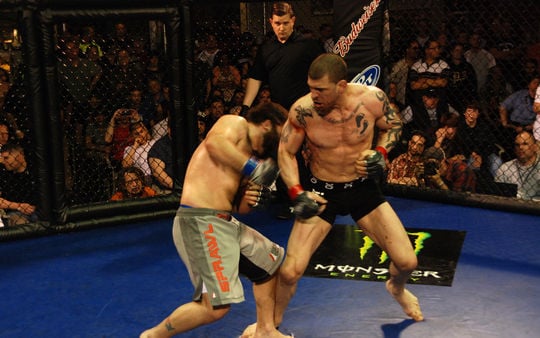 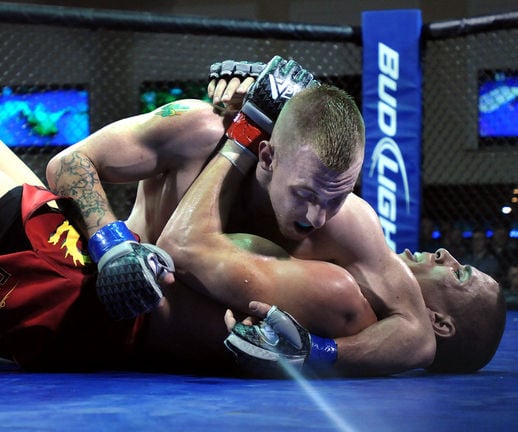 SALEM — When they entered the cage, the room at Rockingham Park was buzzing with anticipation of Isiah Ocasio's MMA debut.

When Haverhill's Ocasio and Plaistow's Dave Clemens left the cage, it was the latter who had the sellout crowd buzzing.

Clemens, who also was making his debut, picked up a convincing decision win over Ocasio Friday night at Combat Zone 37, dominating the fight on the ground and scoring with shooting takedowns.

"I wanted to avoid his strikes," said Clemens, an Eagle-Tribune All-Star wrestler for Timberlane in 2009. "He is a better striker than me and I'm a better wrestler than him. Instincts just took over."

Clemens scored a takedown early in the first round and kept Ocasio pinned on the mat, landing hammering body punches and taking his wind.

In the second round, the fighters stood for the first half of the round, circling.

"I think he wanted some distance because he wanted to strike," said Clemens, who trains at Spero Martial Arts in Plaistow, as part of the school's Team Pitbull. "I knew that and when I saw my chance to shoot I took it."

Clemens scored with another takedown late in the round.

"I had to watch out for his striking because he is a really good striker. He can punch and he can kick and he's talented."

Despite giving some pounds to Ocasio, Clemens was the stronger of the two in grappling, imposing his will.

He gained top position in both the first and third rounds and was on offense the entire time.

"I knew (the ground) is where I'd be most effective and I just kept going to it," Clemens said.

Haverhill's Ralph Llorens beat Plaistow's Xavier Vargas (2-2) in his debut. Llorens scored two takedowns in the first two rounds before he gained the mount in the final round and landed punishing blows to Vargas' face. The referee stopped the fight at the 2:39 mark.

Tom Moreau was victim of an ear punch in the first round and tried to battle through it. But with his equilibrium thrown off, the Derry fighter lost on a triangle choke to Dave Hulett of Las Vegas. It came just seconds after the doctor ruled Moreau could continue.

Perry Filkins silenced the crowd with his TKO win over Lawrence's Will Santiago.

The fighters stood for most of the fight, trading punches before the referee called a stop to the fight at 2:53 of the second round.