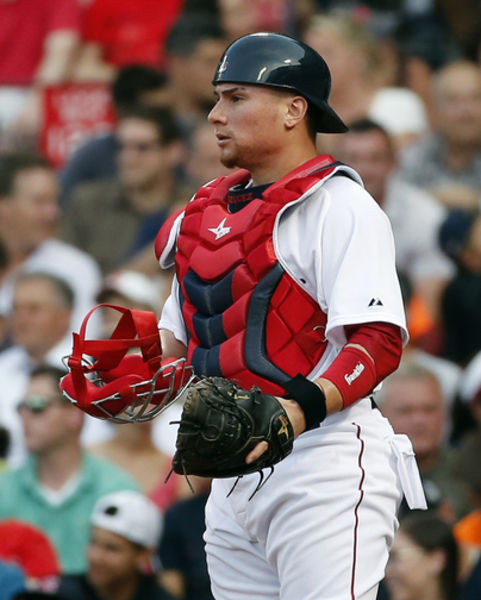 Red Sox catcher Christian Vazquez is making a name for himself because of his strong arm and framing ability. 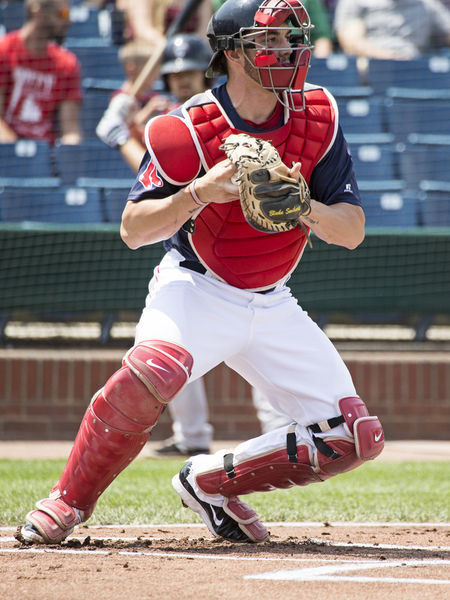 Red Sox prospect Blake Swihart, who is playing for the Portland Sea Dogs, has thrown out 54 percent of base stealers this year.

Red Sox catcher Christian Vazquez is making a name for himself because of his strong arm and framing ability.

Red Sox prospect Blake Swihart, who is playing for the Portland Sea Dogs, has thrown out 54 percent of base stealers this year.

Baseball America ranked Swihart the 14th best prospect on its 2014 Midseason Top 50 list. Swihart has a sweet swing and has thrown out an eye-popping 54 percent of base stealers (27 of 50) this year.

And 37-year-old Red Sox veteran catcher David Ross isn’t too shabby a defender either. Sure some gray hair is growing on that goatee of his, but he can still catch with the best of them.

So who better than Ross to evaluate Vazquez and Swihart and talk a little catching? OK, let’s begin ...

Christopher Smith: John Farrell has been complimentary of Vazquez’s strong forearms and how he’s able to catch the low strike and frame it so well without his arm moving. Do catchers work a great deal on strengthening their forearms?

David Ross: “I don’t know if it directly correlates with forearm strength. I think it’s more of how you catch the baseball. He (Vazquez) has such good hands that he’s able to beat the ball to a spot and stop it. So I think it has more to do with having really good hands (and) eye-hand coordination where he knows where the ball’s going and he can stop the ball and catch it rather than find the ball and catch it.”

Smith: Blake Swihart has caught 54 percent of base stealers ...

Smith: Did you see that kind of arm from him during spring training?

Ross: “Yeah, him and Vazquez have really, really good arms — some of the better young arms I’ve seen. And what goes along with it is a quick release. I think a lot of people get caught up in the arm strength. But both those guys have quick releases and they’re accurate. Everybody could have a really good arm, but if you don’t throw it to the base (accurately), you’re not going to be successful. So these guys have quickness, which means transferring the ball from their glove to their hand and getting rid of it.”

Smith: Is there any major league catcher who Vazquez reminds you of?

Ross: “Him being from Puerto Rico, he knows the Molina brothers (Yadier, Bengie, Jose) pretty well. And so I think he’s got a lot of their similarities and really has attached himself to that crew. Those guys are great teachers. Definitely the best catching family ever to step foot on a baseball field. All three of them have won World (Series) championships and have led their teams.

“Vazquez knows those guys really well and talks to them a lot about catching and you can tell. He’s really far along in the way he calls a game and handles a pitching staff. And he’s excited about the catching aspect, not just the hitting part of being a catcher. That just shows his maturity already.”

Smith: Is there some catcher who especially helped you when you were a young major leaguer?

Ross: “I am more of quiet guy or I used to be. I’ve come out of my shell a little bit (said this laughing a bit). But I tried to stay out of the way. So I’d watch a lot of guys. Steve Yeager used to be with the Dodgers and used to help me out. Rick Dempsey changed my catching stance. Del Crandall was my catching (instructor) coming up. Jerry Weinstein who’s now the bullpen coach in Colorado, (helped). I tried to take a little bit along the way from each one and what they were telling me worked best for me.”

Editor’s Note: David Ross is one of the most personable major leaguers so it’s difficult to believe he was ever actually quiet.