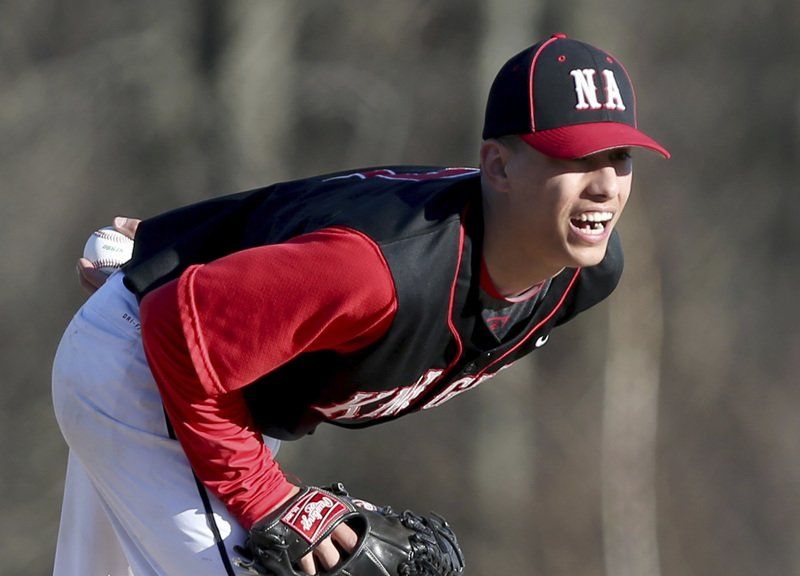 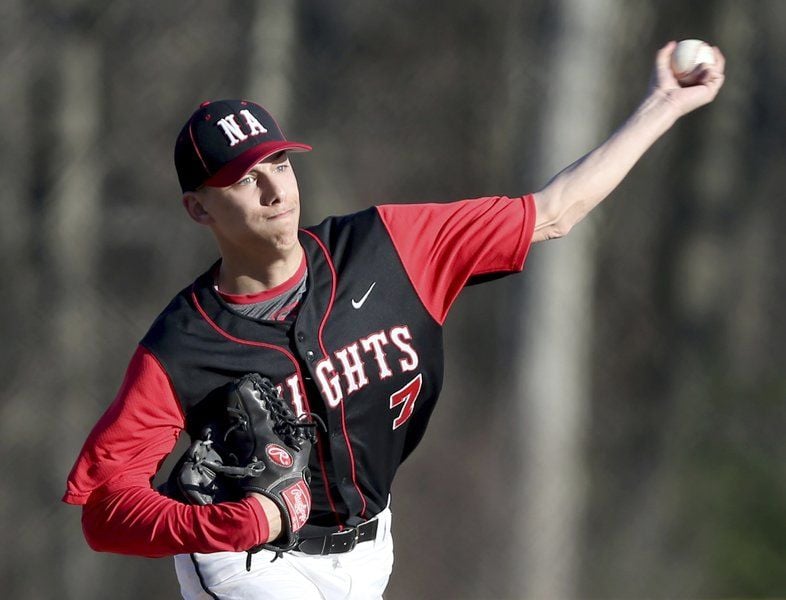 Those words, as recently at two years ago, were not part of Evan Glew’s vocabulary.

Today, they roll off the North Andover High senior’s tongue with pride.

Glew is one of the hottest pitching commodities in the state right now, leading the Knights to a 6-1 start. Picking up right where he left off as a junior, Glew has been nearly unhittable, going 3-0 with 27 strikeouts and just six walks in 20 innings of work. He’s allowed two runs, only one earned.

All those numbers leap off the page. But, for Knights’ coach Todd Dulin, he sees one number when it comes to Glew.

“(Freshman year) he had 266 class hours missed,” said the coach, who saw some promise from the lefty back in the team’s 2012 tryout, but had to inform Glew that he wasn’t eligible to play.

North Andover High was losing him.

“I was sick. It started with serious migraines, and I missed a ton of time in class,” said Glew. “With the time away, I got way behind. And that really attacked my self esteem. I didn’t want to be here.

Glew wasn’t a trouble-maker. He didn’t go seeking problems. Inactivity was his biggest enemy. And even at the age of 15, Glew was headed to nowhere.

“It was awful. I was pretty much alone,” Glew said. “My parents were furious. They didn’t want to see me doing nothing, and they knew I was a lot better than what I was doing.”

Glew might have just slipped away. But then he was thrown a lifeline — baseball.

“It was the one sport I’ve always loved,” he said.

A solid but unspectacular player as a youngster — “They didn’t pitch me that much in Little League,” he chuckles — Glew is a self-made player.

“My dad and I worked on my pitching the whole time,” he says. “We put a lot into it.”

Still, without going to class and making some progress, it wasn’t going to matter.

Baseball, more specifically Dulin, wouldn’t quit on the kid, and neither did North Andover High.

After taking care of the migraine problems, Glew had few options and no excuses. So he rallied.

“You have to give a lot of credit to the people in the school, which took the time and got him back on track,” said Dulin of the long process academically.

Glew agreed: “I had a lot of support from my teachers, coaches, teammates, and I got myself back on track.”

He repeated freshman year and planted some academic roots as a sophomore. By the time his junior season rolled around, Glew was ready for the diamond.

“Baseball played such a huge role, to get out here with my team, contribute and just have fun,” he said.

One Knight made sure Glew would stick it out, though. And talk about selfless. Classmate Max Guertin might have been threatening his own innings on the mound by helping Glew back into the fold.

“All he thinks about is the team,” said Glew of Guertin.

“Max has always been there for me. He pretty much dragged me back into baseball.”

Fortunately for both, and for the Knights, there have been plenty of innings to go around for these two.

Guertin is set to pitch for Dulin’s brother Scott at Fisher College next year.

“I didn’t get into Fisher, but I’m taking the two classes they said that I needed to have right now,” said Glew. “Community college is there for me, too.”

At least now, Glew has options, where four years ago, he stared at nothing but dead ends. It borders on a baseball miracle.

“What if I didn’t play baseball? I honestly don’t know. I have no idea where I’d be right now,” Glew pondered. “Right now, thanks to baseball, I can be the first one in my family to go to college.

“That would be pretty nice.”

After going 5-3 as a junior, North Andover lefty Evan Glew is off to a sizzling 3-0 start.