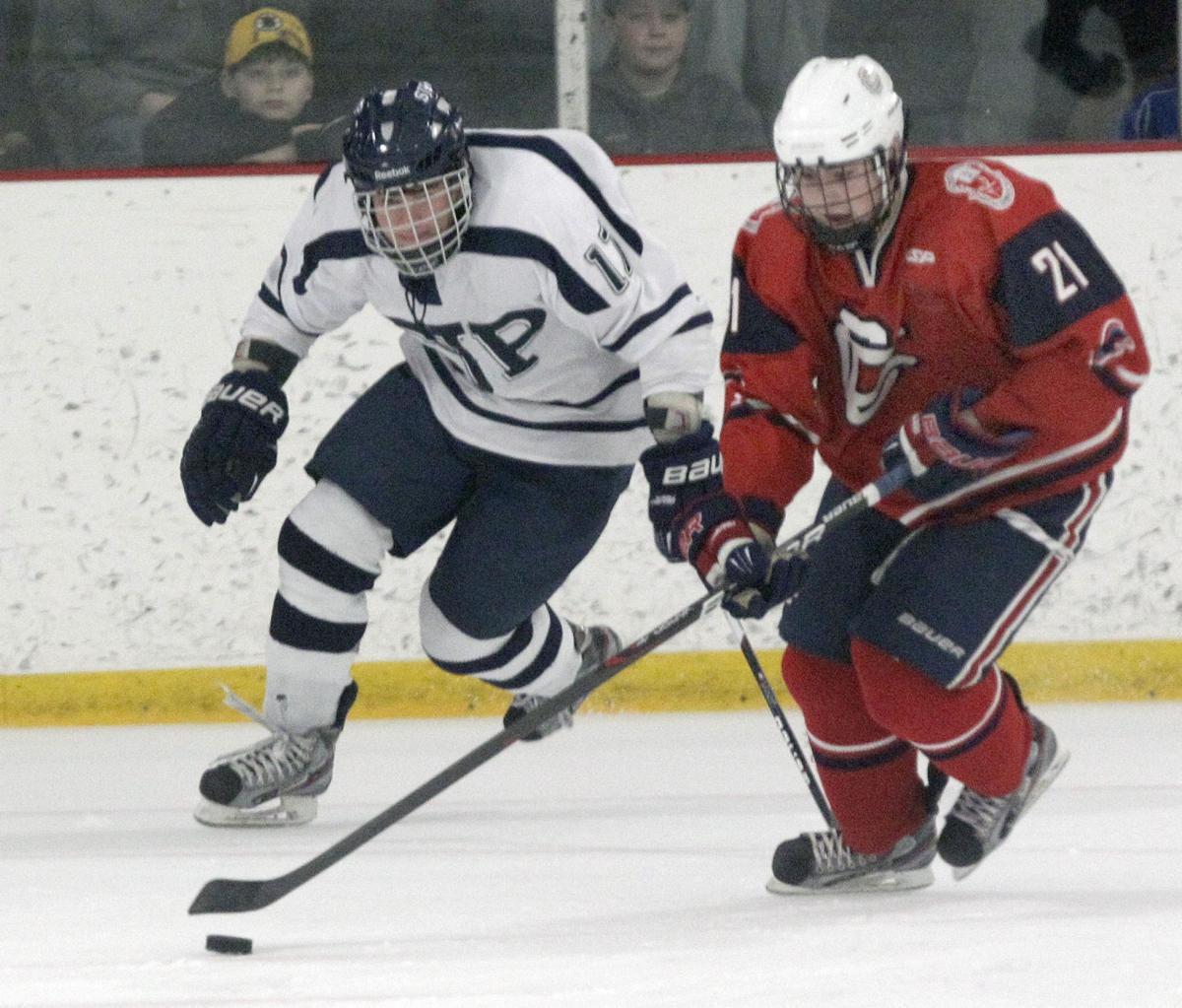 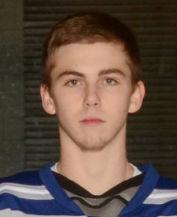 LAWRENCE -- Central Catholic's Billy Stahley appears fearless on the ice, a forward just as comfortable mixing it up in front of the net to earn the dirty goal as he is using his speed and athletic ability to score the pretty goal.

His fire on the ice is only matched by his fierceness in the weight room, where he has built himself from a member of the JV-B team to a top-line winger on the Super 8-contending Raiders.

So few would believe, and until recently even close teammates did not know of the illness that forces Stahley to undergo frequent blood transfusions.

"I don't tell people often because I don't want it to define who I am," said Stahley. "I don't want my illness to make anyone lower their expectations for me. It is an obstacle I have to overcome, and I always make it a point to look at the glass as half full."

Two years ago, Stahley was diagnosed with an autoimmune disease, which forces him to undergo transfusions that last 4-6 hours very three weeks at Children's Hospital Boston.

"Basically, my body doesn't produce enough immunoglobulins, which fight infections," he explained. "It was definitely shocking when I found out, but everyone is handed a deck of cards. What defines someone is how they deal with it. It is what you do after you find out."

Stahley hasn't allowed the illness to prevent him from becoming a standout for the Central hockey team. He is currently fourth on the high-scoring Raiders (13-5-1) with nine goals and 15 points.

"Billy has a tireless work ethic and will do anything he can to become a better player," said Raiders coach Mike Jankowski. "But that's not to diminish his abilities. He is a big and strong player who can shoot the puck and skate very well. He is also a terrific leader. He never backs down."

On Saturday, Stahley will take on a familiar foe, as the Andover resident will lead the Raiders into action against their archrival Andover High at 5:40 p.m. at the Valley Forum in Lawrence.

"I love playing against my hometown," said Stahley. "I grew up playing with a lot of the guys on this team. I am still friends with guys like Zach Walker and Will Sauerbrunn. We like to talk trash, it's fun. "Anytime I am out there skating with them, it brings me back to those younger days and reminds me of how passionate I was when I was younger and how passionate I am today to play the game I love."

After considering options including Andover High, Stahley made the decision to attend Central Catholic. But his hockey career did not take off right away.

As a freshman, Stahley played for the Raiders' JV-B team, watching from the stands as Central advanced to the Super 8 semifinals.

"It feels like yesterday I was there," said Stahley. "I remember the day I found out. I was standing in the gym and I was very discouraged. I was down on myself at first, but I knew I just had to work harder to show the coaches I belonged on the varsity team."

A season later, Stahley earned a role as a third-line winger for the Raiders varsity team, and 10 games into the season he potted his first varsity goal, against a special opponent.

"My first goal was against Andover, which made it even better," he said with a laugh. "(Alex) Lester was coming down the left side of the ice on a 2 on 1. He gave me a great pass and I just buried it top shelf."

He finished the season with two goals and eight assists for the Central squad that earned a dramatic overtime victory in the Super 8 play-in round before falling to St. John's Prep in the best-of-3 first round.

"I loved the feeling of doing my job," said Stahley. "I put a lot of pressure on myself. But it helped me a lot in the middle of the season when (assistant coach Kim) Brandvold sat me down and told me to to imagine it is the first game. He is great to work with. After that I felt a lot better."

As he was stepping into a major role for the Raiders, few knew Stahley was also dealing with health troubles.

Two years ago, Stahley was diagnosed with an incurable autoimmune disease.

"It was definitely a surprise," he said. "I got sick a lot. I was on antibiotics 32 times two years ago. My body basically cannot fight infections.

"Every three weeks I have to go into Boston for blood transfusions. I will have to do it for the rest of my life. It takes around six hours, which I usually spend doing homework, watching Netflix and talking to my mother. Really the only negative is it gives me a pretty bad headache."

Instead of dwelling on his misfortunes, Stahley's experiences gave him a new view on life.

Through those occasional ill feelings, Stahley has continued to hit the ice for the Raiders.

As the top line right wing, Stahley scored a goal in each of the first three games of the season.

"He has plenty of natural ability, but the time and willingness to dedicate himself has made him even better," said Jankowski. "He works hard in the weight room and on the ice. And he approaches everything with that dedication, including the classroom."

Following the season, Stahley is planning to play a postgrad year and is considering schools including Phillips Andover and Phillips Exeter. But there is lots of work left this winter.

The rivalries of hockey took a back seat to tragedy on Dec. 31, when Waltham hockey player Cole Soave's mother was murdered in their home, according to the Boston Herald.

Three days later, when Waltham faced Andover High at the Valley Forum in Lawrence, the Golden Warriors paid tribute to the Soave family with a moment of silence and other shows of support.

But Andover wasn't done there.

The donation began as a $300 50/50 raffle, but further donations from players, parents and other supporters caused it to grow.

"Community over wins and losses," said Kuchar on Twitter. "Never turn your back on a player/team/community in need."

Salem star winger Cody Soucy tallied the 50th goal of his varsity career last week. The milestone score came in dramatic fashion, as the overtime game-winner in a victory over Pinkerton.

A game later, Soucy scored two more goals to give him exactly 100 career points. In 80 games for the Blue Devils, Soucy now has 52 goals, 101 points and a plus-74 plus-minus.

Wednesday was a huge day for Pinkerton hockey star Gio Corsetto, who with two goals reached 100 career points in his four-year varsity career.

Corsetto became the fourth player in Pinkerton hockey history to hit the mark, according to coach Joey Lee.

The younger brother of former Eagle-Tribune All-Star and Astros linemate Dom Corsetto (90 career points), Gio has 12 goals and 30 points for the season.

PLAYING FOR A CAUSE

St. John's Prep hockey will be playing in memory of a late friend on Saturday, when the Eagles host BC HIgh in the annual Derek Hines Memorial hockey game.

A former Prep hockey star (class of 1999) Hines, a graduate of West Point and 1st Lieutenant, was tragically killed in September 2005 while conducting security operations in Afghanistan.

The game will be played at Ristuccia Arena in Wilmington on Saturday at 2:30 p.m. Last season, the Prep made a $6,500 donation to the family's fund.

Haverhill goalie Mike Gleason scored his second career shutout, and first of the season, on Wednesday when he made 25 saves to blank North Andover.

But the netminder has been a stable force for the Hillies all season.

Gleason has been in net for all but one game this season, delivering a 2.53 goals-against average. He has allowed more than three goals just twice this season, his second as a starter.

But he even has to marvel at the work by Haverhill/Pentucket/North Andover girls goalie Michaela Kane.

Kane has two shutouts, and has allowed just one goal in eight other contests. That includes blanking Tewksbury/Methuen and Amanda Conway, who Wednesday broke her own state record for goals in a season. Kane made 31 stops that night.

WHAT IS AUTOIMMUNE DISEASE

--Causes are unknown, but often genetic.

--Aproximitally 50 million cases in the USA

David Willis is a sportswriter/videographer for The Eagle-Tribune. Reach him on twitter at @DWillisET