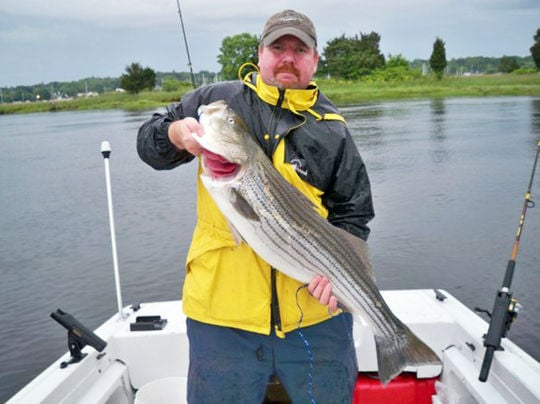 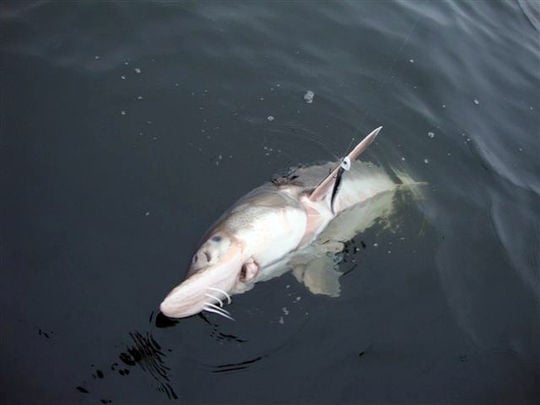 This Atlantic sturgeon was caught by John Solomon of Methuen while fishing for stripers in the mouth of the Merrimack River last week. As required by law, the rare fish was released.

This Atlantic sturgeon was caught by John Solomon of Methuen while fishing for stripers in the mouth of the Merrimack River last week. As required by law, the rare fish was released.

This is really a great time to live in New England if you love fishing. Ocean temperatures are still rising, and baitfish continue their push north enticing many game fish to our shores. Bass, bluefish, flounder, tuna, cod, and haddock are all available to anglers on the North Shore and along the Granite State's seacoast. There's also the occasional surprise — like the Atlantic sturgeon caught in the mouth of the Merrimack River last week.

Marblehead: The Neck has been fishing well as bass have been in close to the rocks chasing bait. Medium- to large-profile flies and lures have been getting hammered. Bluefish are also around so don't be surprised if you're cut off while fishing for striped bass.

Salem: There have been pogies around Salem Harbor and if you can snag a few and live-line them, you may well catch a 40-pound bass. Bluefish have been cavorting in Salem Sound and fish are taking most lures and lots of chunk bait — don't forget your wire line!

Beverly: Anglers report good action for bass and some bluefish around the Beverly-Salem Bridge. Flounder fishermen continue to find legal fish around the harbor and just outside. Fishing from the Pier at night has yielded a few nice bass over the last week.

Cape Ann: The Manchester and Magnolia shoreline continues to hold good numbers of bass for those stalking from shore or boat or kayak. The beaches of Gloucester, including Wingaersheek and Good Harbor are fishing well for landlubbers, with large pencil poppers working well at night. The Annisquam continues to hold fish, but you'll need to look a bit harder as bait has become a bit scarce. Halibut Point and the waters around Thacher's and Kettle Island have been yielding good-sized stripers and bluefish. The northwest corner of Stellwagen has been providing action for anglers in search of tuna. Live pogies have been the best bait.

Ipswich: Terrific fishing is available around Ipswich as bluefish and bass have been active around the mouth of the Ipswich River, in Ipswich Bay and off Pavilion Beach. Crane Beach continues to fish well for bass, mostly at night.

Newbury: Parking Lot 1 at the refuge continues to attract anglers, and for good reason. Over the last week, good numbers of bass and some blues have been taken from the beach. The Parker seems to have slowed a bit, but nighttime action should still be viable.

Newburyport/Plum Island: Don Osmer of Ayer hooked a 25- pound bass on an overnight trip this past week, up river of the Gillis Bridge. The fish fell for a live eel. Joppa Flats continues to fish well for both fly fishermen and eel fishermen at night. The Plum Island beachfront has been yielding fish to plugs, cut bait, worms and clams. Bluefish have started to arrive, scaring mackerel away, and flounder fishing continues to be good. John Solomon and Jim Hajjar out of Methuen and Captain Ralph out of Salisbury had the catch of a lifetime last week when the hooked and carefully released an Atlantic Sturgeon at the mouth of the Merrimack. John, being an experienced angler, knew he had a big striper — "either that or a sturgeon," as he said to his buddies. The fish fell for a 1-ounce lead head rigged with a 6-inch Sluggo on 30-pound braid. John estimates the fish took 20 minutes to land, and it leaped clear out of the water at one point. As per regulations, John released the fish without ever having it leave the water.

Salisbury: Mackerel have become a bit scarce, as bluefish have made their annual arrival. Blues have been taken at the mouth of the Merrimack, from the North Jetty and from Salisbury Beach. Plum Island Point continues to provide good bass action, mostly for bait anglers.

New Hampshire seacoast: Mackerel are still somewhat abundant outside the Piscataqua out to the Isles of Shoals.

Larger bass have been keying on the bait, and some 40-pound fish have been taken on live-lined mackerel. In some of the Great Bay river systems, alewives remain thick, providing good opportunities for bass. Cod fishing remains strong near the Isles of Shoals.