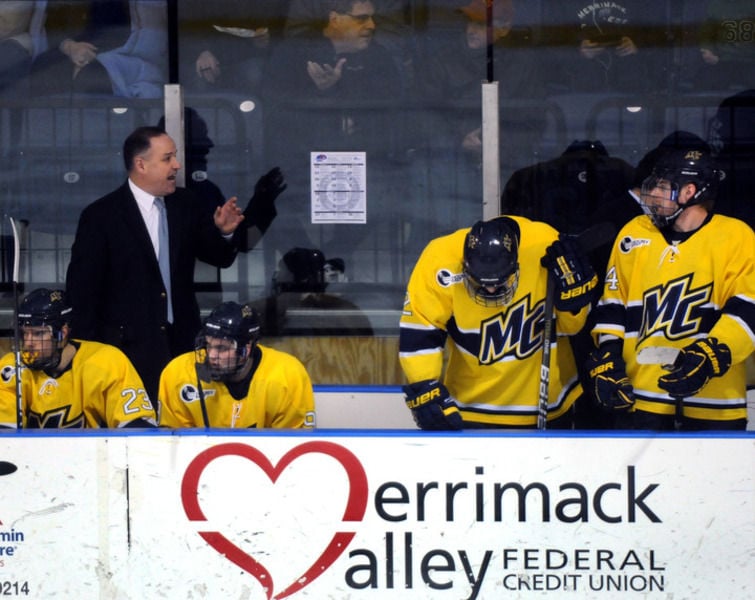 Merrimack College head coach Mark Dennehy talks to his team during a previous matchup with UMass Lowell. Dennehy's Warriors struggled on the offensive end in a loss to Lowell last night. 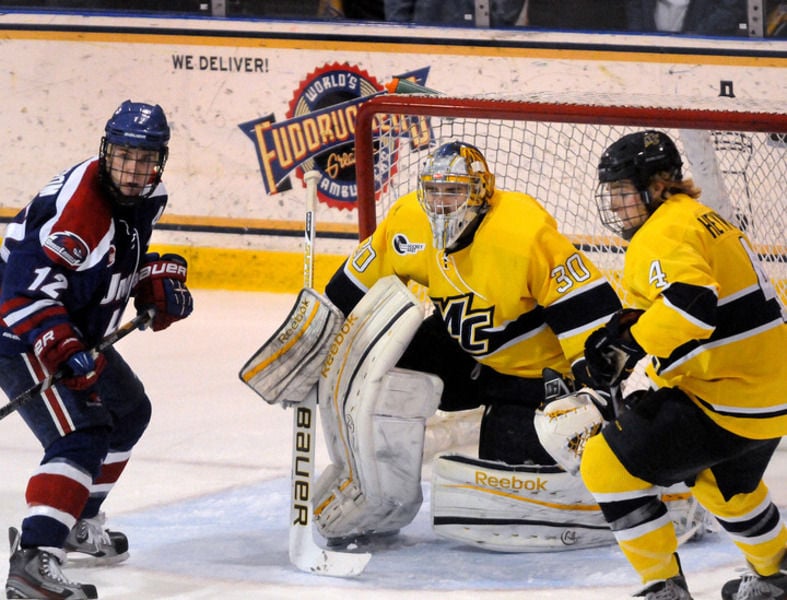 Merrimack goalie Sam Marotta goes for a save against UMass Lowell last season. Marotta had a solid game with 20 saves, but the Warriors fell to the River Hawks last night.

Merrimack College head coach Mark Dennehy talks to his team during a previous matchup with UMass Lowell. Dennehy's Warriors struggled on the offensive end in a loss to Lowell last night.

Merrimack goalie Sam Marotta goes for a save against UMass Lowell last season. Marotta had a solid game with 20 saves, but the Warriors fell to the River Hawks last night.

NORTH ANDOVER — Coach Mark Dennehy has done wonders for the Merrimack hockey program, taking it from Hockey East laughingstock about a decade ago to a NCAA tournament berth in 2010-11 and the No. 1 ranking in the country at one point the next year.

But the program — although not nearly as bad it was 10 years ago — hasn’t played well in recent history.

UMass Lowell won 4-0 over the Warriors here at Lawler Rink last night. Merrimack sits in the cellar of Hockey East with a conference record of 2-9-2. The Warriors also are just 8-22-4 in their past 34 contests.

The atmosphere here at Lawler Rink is tremendous. The student section is rowdy, the band plays enthusiastically and the attendance has been strong. If you arrive at a game only 10 minutes before puck drop, be prepared to park on the other side of campus.

But don’t expect this rink to be rocking if Merrimack continues to lose, especially with more clunkers like last night. Several fans scooted out before the third period began.

Meanwhile, Dennehy defended his team’s play when he simply should have admitted that the Warriors must do a better job.

“It’s a game of inches,” Dennehy said. “And they (the River Hawks) were on the right side of those inches four times.”

Merrimack’s big issue has been a lack of scoring. Beyond Mike Collins, Brian Christie and Chris LeBlanc, nobody else on the team has 10 or more points this season.

Yesterday’s loss marked the sixth time Merrimack has been shut out this season. Scoring had not been an issue in recent years. Merrimack had a run of 41 straight games without a shutout loss which ended last March.

To be fair, UMass Lowell has one of the country’s top defenses. It was holding opponents to 1.96 goals per game entering last night.

River Hawks coach Norm Bazin credited his team’s strong stick defense around the net and shot blocking for the shutout.

“I think they had a 2-on-1 out of a play in the second period where they might’ve had five guys in the crease trying to block a shot,” Dennehy said. “I mean, you can’t put a Bazooka through that. They defend incredibly hard.”

After sitting in first place in Hockey East on Feb. 13 last year following a 2-1 overtime victory over Boston College, the Warriors went 1-7-1 to finish the season.

The problems have persisted this season.

And honestly .... this game wasn’t nearly as close as the postgame quotes suggest.

Next: at Boston College on Friday at 7 p.m.