Golden State Warriors guard Stephen Curry is crying after the Warriors defeated the Boston Celtics in Game 6 of the NBA Finals on Thursday in Boston. 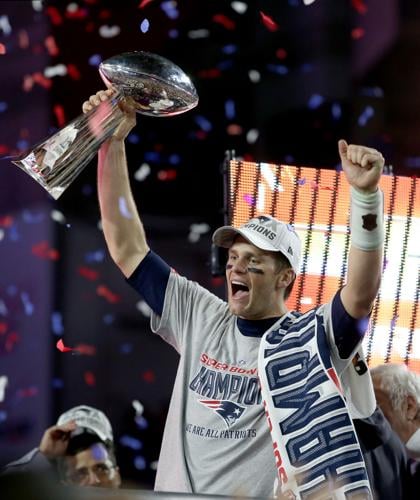 Golden State Warriors guard Stephen Curry is crying after the Warriors defeated the Boston Celtics in Game 6 of the NBA Finals on Thursday in Boston.

Why was Steph Curry crying, losing it on the TD Garden parquet floor, after the final buzzer late Thursday night?

He had dazzled before in June, having already won three NBA titles.

Because this championship was different. and I’ll argue, this was the most important championship of his illustrious career.

I harken back to early February of 2015, the Seattle Seahawks were at the Patriots 1-yard line, a Marshawn Lynch monster mash run away from winning the Super Bowl.

Instead, the Seahawks and Russell Wilson threw the ball, immediately making an undrafted free agent out of the University of West Alabama, Malcolm Butler, who picked it off, a household name.

It was the scene on the Patriots sidelines, though, that exemplified the meaning of that victory.

Then-Patriots quarterback Tom Brady was jumping up and down, up and down, like a high school girl who got asked to the prom.

Brady didn’t cry, but after the jumps he hugged his offensive coordinator Josh McDaniels and said, “Oh my God, Josh … We did it!”

What Brady did then and what Curry did on Thursday night was put themselves into another category.

The best part for both was gap between Title No. 3 and Title No. 4.

The Patriots had gone 10 years without winning a Super Bowl, losing two, including The Perfect Season debacle against the Giants in 2007.

Brady, who had taken over the throne of the best quarterback in the NFL, needed another title badly.

The Warriors had gone only three years, but it seemed like 10 years considering the drama and injuries that followed No. 3. Seeing carpet-bagger Kevin Durant leave to start his own title team, added to the pressure.

But when it comes to athletes like Brady and Curry, and you can include LeBron James, legacy is very, very important.

They don’t want to be just the best. They want to be with the best of the best, on Mt. Rushmore.

Curry exhibited those necessary qualities over the last two months.

While most teams had two elite players they could count on to deliver most of the time, the Warriors had one – Curry.

Curry needed this championship, proving to others that either doubted or weren’t sure of his greatness, that he is in that small group of athletes.

Being the “greatest shooter of all-time,” which is already in his trophy case, wasn’t enough.

Now, with what happened on Thursday night, he is among the top 10-ish to have ever played the game of basketball:

Now you can add Steph.

That fourth title he won meant something.

Brady didn’t stop there. He won three more, setting himself apart from No. 2 in a big way.

Whatever happens from here on out, whether Steph makes a crack at the top five, only time and a few more championships will tell.

But I will tell you this. That No. 4 on Thursday night was worth crying for.

It was a bad few weeks for sports analytics, which is the hottest new occupation for sports-crazed college grads who want to be future general managers without ever playing a sport.

ESPN’s Power Index simulator, basing the predicted outcome on past performance and statistical matrixes, had the Celtics winning … no, make that destroying, the Warriors in the NBA Finals.

It had the Celtics as 86 percent favorites over the Warriors, despite what pundits, with eyes, predicted.

The analytics geeks and computer analysts were apparently enamored with the Celtics defense, and the fact that it was by far the best in the NBA based on, of course, analytics.

Well, analytics apparently didn’t have a measurement for Steph Curry’s heart, or Andrew Wiggins ability to outplay Jayson Tatum on both ends of the floor.