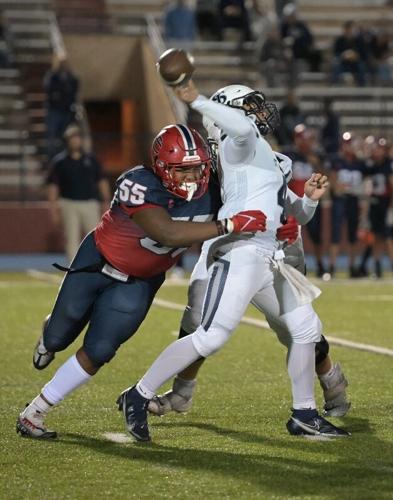 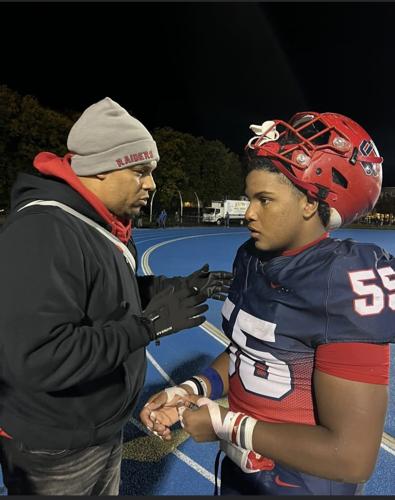 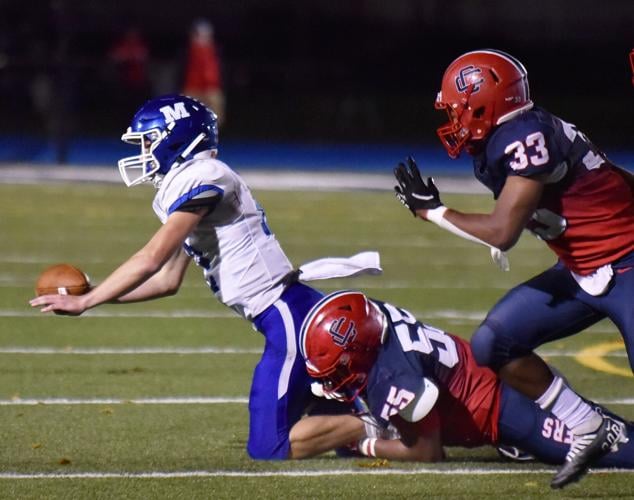 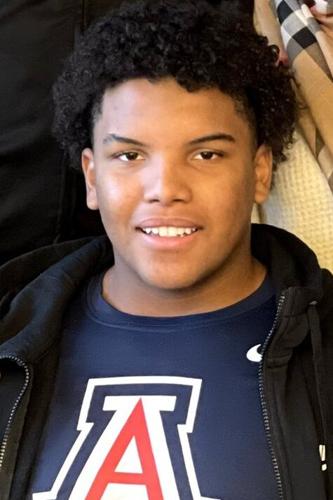 LAWRENCE — With an NFL Super Bowl champion/ultimate overachiever for a dad and an older brother destined to play bigtime college ball in the PAC-10, Jaden Wiggins had to have the weight of the football world on his shoulders the first day he walked into Central Catholic.

“I enjoy (being ex-New England Patriot tight end Jermaine Wiggins’) son. There’s definitely more pressure on you,” said Jaden, who leads Central into Friday night’s Division 1 state semifinal with rival Saint John’s Prep. “Everyone expects you to be great and better than the average (player). I think I am. There’s more responsibility for sure.”

While all eyes have been on him on Hampshire Street, basically for four years, his coach Chuck Adamopoulos says not once has he seen pressure heaped on Wiggins from where it matters most — at home -- and that has been key in the Raider senior two-way lineman’s rise to prominence.

“I’ve really never seen it, not once,” noted Adamopoulos.

“I don’t think they put any pressure on him at all or that they feel he has had to live up to something or someone. They’ve let Jaden be Jaden.”

And Jaden has grown into a gridiron monster. A mainstay as guard and defensive tackle, the 6-foot, 250-pounder has enjoyed dominant Friday nights this fall as the 8-2 Raiders have piled up the wins.

“He’s come a long way in his four years. He was just a short, chubby kid as a freshmen, a decent freshmen football player,” said Adamopoulos. “He’s really worked hard turning into what he’s become. You see where he was as a freshman, to where he is now. He really worked hard to make himself a good football player. He wanted to be good, and he’s just worked at it. In this day and age, it’s great to see.”

While big brother Jermaine, now a freshman at the University of Arizona, was a bit more of a pure athlete at 6-foot-3, Jaden is clearly built in his dad’s mold.

“He’s built like his dad for sure,” said Adamopoulos.

He also inherited his dad’s resilience gene. Just like the ex-NFLer, Jaden refuses to relent or to be denied.

“I think every week I can be better. From the first week to now, I think I’ve improved a lot, especially from last year to this year,” said Jaden.

Jaden has been an absolute demon in the trenches. He tormented The Prep in the teams’ regular season meeting, a 17-7 Raider win. He did the same just about a year ago when the teams met in this same spot.

In fact, it was the first meeting in 2021, a Prep blowout win in Week 2, that help motivate and drive Wiggins to the point he’s at now.

“That first game, he was at left tackle, and he’ll be the first to tell you he struggled in that game with pass blocking,” said Adamopoulos, whose deftly slid Wiggins inside to guard and watched him take off. “He played really well against them in the playoffs, but he’s been dynamite every game. He’s just one of those guys as a senior, you’re not surprised what he does for us.”

Both Jermaines have certainly been there with Jaden every step of the way.

“My dad is a great teacher. He was a great coach for me back in middle school. He knows a lot about the game, and he’s taught me what he knows. My brother, I love him, I miss him every day. He’s taught me just as much as my dad did.”

What neither did was ask Jaden to be something he wasn’t.

With his career at Central winding down, Wiggins is hoping to put together enough on the field to make some college coach notice.

He still prays every night for an extra inch or two. That could really make a difference.

But Wiggins isn’t waiting for some kind of divine intervention. He’s hoping that his work on the field helps kick the door down.

“I’ve been talking to a bunch of schools, hopefully one can just take a shot on me,” said Wiggins. “They’re hating on my height. A lot of coaches think they can teach the motor or the physicality. I don’t think so, because you have to be mentally tough. Growing up with my brother, he made me tough. But it would help just to grow a little bit.”

The recruiting road can be put on hold just a bit. Wiggins and the Raiders have a mighty task on Friday night with the Prep, just as they did a year ago with a trip to Gillette Stadium and a potential return to the state title game hanging in the balance.

“They have Joenel Aguero and a bunch of great receivers. They have a great team, but we are too,” said Wiggins. “Same field, same game, same jerseys as last year. and hopefully, the same outcome.”

Wiggins dad: Central was everything we hoped

Former New England Patriots tight end and current WEEI morning co-host Jermaine Wiggins and his wife Tallena were involved in some big decisions more than a half-dozen years ago.

Where to send their eldest son, Jermaine Wiggins Jr.

They eventually chose Central Catholic. And that choice was obviously the right, being the Wiggins other son, Jaden, also decided to follow his brother there.

"It's been an amazing run," said Jermaine Sr. "We were told that our boys would have high expectations in the classroom and in athletics. And they were. My wife and I couldn't be happier."

The Wiggins family had a few schools they were considering as residents of Boxford. They chose to make the drive to almost every Lawrence.

"It is funny. I've been to Lawrence a lot over the last few years," said Jermaine Sr. "It really was worth it. [Head coach Chuck Adamopoulos] runs a great program. And they really do push the academic side. My oldest son is doing well at [University of] Arizona and we credit Central with that.

"Everything was great, the competition, the academics and the overall experience," added Jermaine Sr.